A Brief History of Downtown Lewiston
By David Chittim

Bounded by the river, Main Street, Bates Street and Adams Avenue, Lewiston’s downtown area includes 220 acres supporting a wide diversity of retail, manufacturing, residential, government, religious, cultural, and recreational facilities. Some 2,400 residents live in the area, principally in rental properties in the southeast and owner-occupied dwellings in the southwest along the river, although a resurgence of apartments and condominiums in the upper floors of commercial buildings has dispersed the population. The riverside area includes a public park and amphitheater, light manufacturing and service industries in the reclaimed textile mills along the canals, and residential units initially constructed to house mill employees. The principal commercial district follows Lisbon Street, which anchors the downtown area. 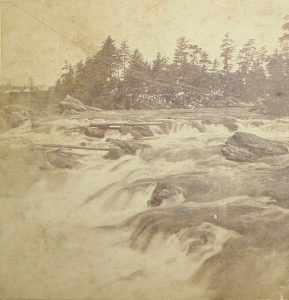 When Paul Hildreth first arrived on the east shore of the Androscoggin River in 1770, he could scarcely have imagined that his homestead site would be eventually overlaid by an inconceivably wide bridge, daily carrying more than 31,000 self-propelled vehicles, the likes of which might constitute his science-fiction. From an aboriginal fishing and gathering place to four-lane highway, the evolution of his homesite is mirrored in the changing face of downtown Lewiston.

In 1840, Lewiston’s 1,801 mostly agrarian residents farmed 100-acre parcels removed from the small village near the Great Falls. Apart from this nascent community of a sawmill, a gristmill, a few residences, and a school house, the area was predominantly agricultural.

The growth of downtown Lewiston from this rustic hamlet to the industrial powerhouse it became was strongly influenced, if not directed, by the Franklin Company, which in 1856 acquired the Lewiston Water Power Company, itself an investment vehicle of the Little family. The Franklin Company created not only the power infrastructure that drove the industrialization of Lewiston, but also the social structure. 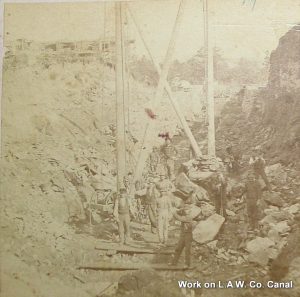 Benjamin Bates and Alexander DeWitt explored the manufacturing potential of Lewiston in 1847 and were sufficiently impressed that Bates ultimately committed his personal credit to undertake the construction of canals. Built to transmit the energy of the Androscoggin as it passed over the Great Falls, the canal system ultimately grew to include nearly 1-1/2 miles of waterway between 50 and 70 feet wide. Between 1848 and 1854 over 400 Irish laborers excavated and lined the canals, moving an estimated 220,000 cubic yards of earth in the process, a prodigious feat. Many of these men were new immigrants fleeing the potato famine for jobs in the new world. They congregated in the poorer housing known as the Gas Patch for its proximity to the odiferous gas works, as well as other shanty-town “patches” throughout the town.

The main canal was opened in 1852, providing the power to permit the construction of two Bates mills as well as the Hill and Androscoggin mills by 1861. These textile mills required workers.

By 1850, Lewiston’s population had nearly doubled. With the mills demanding more and more labor, the recently-incorporated city grew to 7,500 by 1860, and 13,600 in 1870. Many of these laborers, predominantly young women, had moved from the outlying countryside, often living in the supervised tenements built by the mill owners in the immediate vicinity of their work or in the Franklin Company built “Little Canada” just up Lincoln Street from the Gas Patch.

The first view of their new home many new arrivals had was from the Grand Trunk Depot on Lincoln Street, now a popular restaurant aptly named Rails. Passenger service from Lewiston Junction began on the Lewiston and Auburn Railroad Company track in 1874 after many political, financial and technical difficulties, but soon Canadian immigrants were the making the final five-mile ride into downtown Lewiston. 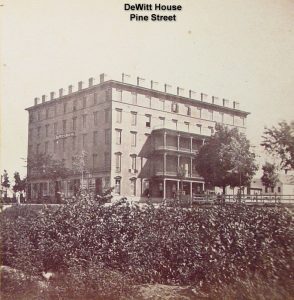 In the 40 years between 1830 and 1870, Lewiston had grown into an incorporated industrial city with a diverse and multi-national population. The Franklin Company, benevolent oligarch, owned much of the land that now comprises downtown Lewiston. In 1861, to provide recreational opportunities for its dormitoried employees, The Franklin Company deeded land for a public park to the City but conditioned the transfer with requirements that the City spend at least $5,000 on improvements within 2 years and that the land remain forever a public park. It was renamed Kennedy Park in 1963.

At the northwest end of this 7-1/2-acre park sat the DeWitt House, one of Maine’s pre-eminent hotels. Built in 1851 by the Lewiston Water Power Company, it housed the offices of the Franklin Company on the Park Street side of the ground floor. As the seat of industrial power, the DeWitt was a counterpoint to City Hall, diagonally across the intersection of Pine and Park Streets.

As the population grew in response to the burgeoning labor market, construction of office and mercantile buildings began in the downtown area. On the corner of Main and Lisbon Streets, the Central Block contained City Offices and other businesses until a fire in 1871 destroyed many of the city’s records and dictated the construction of an impressive new City Hall in 1873 across from the public park. Just 18 years later a massive fire once again claimed the seat of municipal government, leaving a stark hulk of smoldering masonry. The “new” city hall, completed in 1892 on the same site, has seen many interior modifications over 126 years and functions yet today as the seat of Lewiston government. 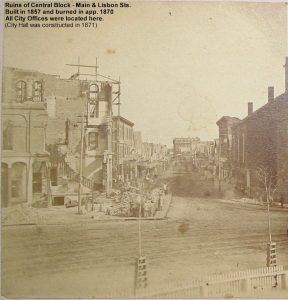 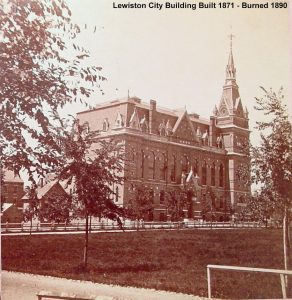 Rounding out the corner, the Public Library was constructed in 1902 with $60,000 grant from Andrew Carnegie and granite from Norridgewock and North Jay. Previously, “The Manufacturers and Mechanics Library” was housed at City Hall and only a few books survived the 1890 fire. These are still in the collection.

After fire destroyed several stores on Lisbon Street, leading citizens decided to construct “the best opera house east of Boston.” Built in 1877 at 69 Lisbon Street the 4-story masonry Music Hall towered above adjacent wooden structures. It offered comedy, drama and melodrama presented by travelling stock companies and itinerant minstrels. One could argue that comedy, drama and melodrama still play out within the building, as it now houses the Maine District Court.

The last decade of the nineteenth century saw many multi-story office and commercial buildings sprout in the rapidly growing commercial center along Lisbon Street as it became the main commercial center. Many of the mercantile establishments were owned and operated by Jewish immigrants from Germany (who had arrived in the 1870s) and Russia, Central and Eastern Europe (1880s and 1890s). All along Lisbon Street, Jewish merchants owned dry goods stores, furniture stores, clothing and shoe stores, groceries, jewelry and hardware stores. 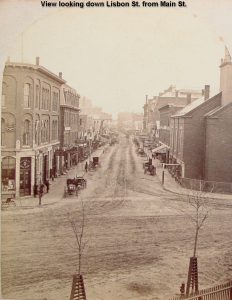 In the waning days of the nineteenth century, Haymarket Square on Main Street was Central Maine’s busiest market for agricultural items. The wide-open street provided ample room for carriages, electric trolleys, automobiles and vendors alike. Horse-drawn hay wagons gradually gave way to parking for the growing number of private cars; livery stables were replaced with automobile dealers and repair garages. In 1928, the area was renamed to honor Capt. Frank W. Hulett, Lewiston’s first casualty of the Great War, who died at Belleau Wood on June 6, 1918, just 158 days before the cessation of hostilities.

Electric trolleys plied the main streets of Lewiston until 1941. Motormen would turn in their cashboxes daily on the third floor of the Central Block at the corner of Lisbon and Main Streets. The overhead catenaries carrying electricity to power the streetcars have disappeared, as have the hitching posts that once lined the streets as ubiquitously as today’s parking meters.

The downtown area now includes 4 parking garages with a total floor area of in excess of 12 acres. The first of these distinctly twentieth-century structures was the Centerville Garage on Canal Street, erected in 1980. Other changes during the 1900s include the construction of LePage Bakeries 2.5-acre manufacturing facilities in 1976 and a second bakery building doubling the footprint in 1984. A third expansion was finished in 2001. The Police Department moved from City Hall to new facilities opposite Kennedy Park in 1986 and the venerable DeWitt house was razed in 1965 and replaced with the 2-story office building, which formerly housed a bank and then the Lewiston Sun-Journal. The old granite post office on the corner of Park and Ash was replaced on the same site with a modern facility in 1934.

A great deal of thanks to The Androscoggin Historical Society and David Chittim for providing this brief of Downtown Lewiston’s history. For more information about The Androscoggin Historical Society, their work, or more in-depth information about the history of these great communities, visit their website www.AndroHistory.org.